Romans 5:8, “But God demonstrates his own love for us in this: While we were still sinners, Christ died for us.” 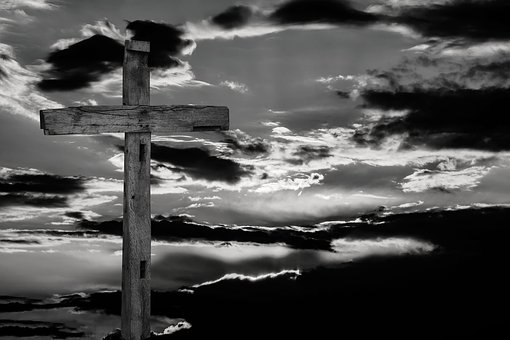 When someone dies, their last words are typically formed around what they hold to be most important, those things most dear to them. The person is speaking from their heart regarding their greatest concerns. Even in dying, we can see that for Jesus, His greatest concern was for us, rather than the excruciating pain that He was bearing. His desire to articulate His thoughts from the cross must have brought shock waves of pain as He struggled to lift His torn body upward against the nails, to draw enough breath to speak. Scripture records that Jesus spoke seven times. Let’s examine more closely these words He deemed so important, He uttered them from the cross in the midst of His passion.

I would like to share some insights garnered from a little book by Russel Bradley Jones called Gold from Golgotha. Jones writes “Everything at Calvary is significant, but in a very special sense the Savior’s seven words, spoken from the heart of His vicarious suffering, interpret Him to mankind.”

In the midst of great suffering, Jesus was thinking of others, not Himself. He had come for the lost and in that prayer He was asking His Father to give them a chance, instead of the condemnation they deserved. He asked God to allow them a chance to believe. Russel Jones points out that in the Greek original, “Then Jesus said” might be changed to “Then Jesus kept saying.” The verb is imperfect, indicating continuous action in past time. Jesus’ prayer was a continuous petition on our behalf in the midst of His suffering!

Jesus was faced with temptation just as He was in the wilderness and in the Garden of Gethsemane. One thief asked for physical release, goading Jesus by challenging Him to show His power and save them if He really was the Christ. The other thief appealed to Jesus to “Remember me when you come into your kingdom.” He wasn’t asking for release from his cross, but from his sin. What is amazing is the choice before Jesus – the cessation of torture or the prize of His agony: totally unworthy sinners such as the self-confessed criminal hanging next to Him – and each one of us!

Notice, Jesus said woman instead of mother. He assigned John as His substitute and in those words severed His earthly relationship with Mary, so she would be free to have the higher relationship of believer, with Jesus as her Savior. Heartbreaking as it must have been for both of them, it was necessary for Mary to lose her son in order to gain her salvation.

2 Corinthians 5:21 tells us, “God made Him who had no sin to be sin for us, so that in Him we might become the righteousness of God.” Jesus suffered for our sin at the cross, in the God-forsaken depths of agony. Jesus’ soul cries out as He descends into hell for us – His Father is no longer there.

In this terrible time of forsakenness, we see the evidence of God’s wrath towards sin. Because Jesus was assuming the sin of the world, God’s attitude towards sin forced Him to turn His back on His beloved Son. This speaks to the incomprehensible sacrifice of both the Father and the Son – all for the sake of love.

Jesus said “I am thirsty” after “all was now completed.” What He set out to do at the cross was complete. There was nothing more to be done. Jesus was also fulfilling prophecy and identifying Himself as the Messiah in those three simple words. In Psalm 69 His suffering is predicted, and that of His thirst when He would be offered vinegar to drink.

In the original Greek, “it is finished” may be translated as one word – “tetelestai” meaning “It was finished and as a result it is forever done.” There is nothing left to be done to complete the work that the Lord Jesus Christ perfected at the cross. “It” is the suffering of the full punishment of all guilt for all time. He paid the penalty due for sin with His perfect sacrifice. Sinners can now approach God through their faith in Jesus and because of His righteousness. A place in heaven is now possible because God’s divine justice has been satisfied. Nothing more is needed.

The last words of Jesus show His death was voluntary, that He chose to give up His life for us. In His final words He is the Victorious Son, committing His all to His Father. This is the best example for us – a voluntary commitment of ourselves into the hands of God with all that we are and have.

We can’t understand everything that Christ said in His final hours, but there is much that we can and should study and reflect on. In Russel Jones’s words, “Golgotha is the place where the contrast between the Savior’s heart of grace and man’s heart of rebellion is most striking. Golgotha is the focal point of revelation and history and experience. There God did His best and man did his worst. There faith is justified, hope assured, and love conquers.”